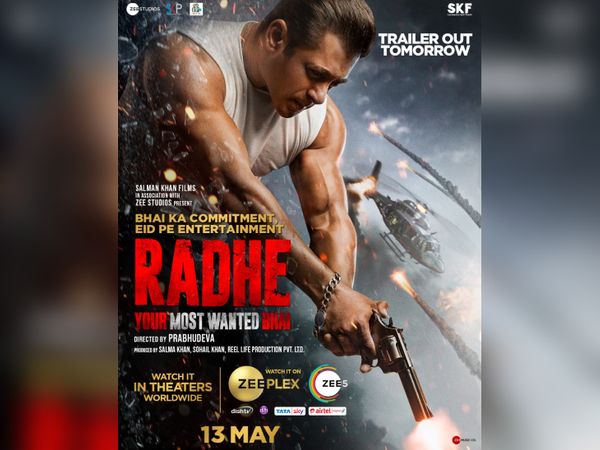 Salman Khan has taken a big decision despite Corona’s terrible conditions across the country. Cinemas are partially open in most states. Despite this, Salman Khan has announced that even in the current circumstances, he will not back down from the release of ‘Radhe: Your Most Wanted Bhai’. The practice of giving Idi of the film will be performed on Eid. The film will be released in theaters on Eid. At the same time, on the same date, the film will also come on Jeeplex under the ‘pay-per-view’ system. Just like Ananya Pandey and Ishaan Khattar’s ’empty yellow’ came on the jeeplex. Under this, the audience got to see the film by giving a certain amount. Here the same rule will be applied on ‘Radhe’. At the same time, the trailer of this film will be released on Thursday

Sharee Patel, CBO of Zee Studios, said, “The Corona epidemic has given all of us a chance to be innovative. We are releasing it on Jeeplex. We also release it in 40 overseas markets where theaters open.” We are doing it. If we don’t release it in theaters then it would have been cheating of Salman’s fans. We also want to take care of everyone’s safety. So, we are releasing it on Jeeplex as well. So that people at home To enjoy it too. “

The spokesperson of Salman Khan said, “Keeping in mind the current conditions, all the stakeholders came together. We took the middle path to keep the cinema industry moving. We also wanted to take care of the rights of the cinema operators and owners. Also we He also wanted to follow the safety mazers. In such a situation, the option was given to everyone to watch movies in theaters as well as at home at the same time. “

Manish Kalra, CBO of ‘G5’ India said, “We are very excited about the release of the film. It is a multilingual film. It is the biggest blockbuster of the year. It is a great pleasure to come up with an agreement with Salman. We are very happy We also want to give this megabuzz movie a big scale of release through the ‘G5’ platform. “

The film will be released in theaters of 40 overseas countries. He is from Middle East, North America, Australia, New Zealand, Singapore, Europe Territory. This will be the first film in England since the lockdown since last year to be seen in theaters there.

How to Increase Instagram followers and likes using hashtags In 2021